What Are The Differences Between NexoPOS 3.x and 4.x 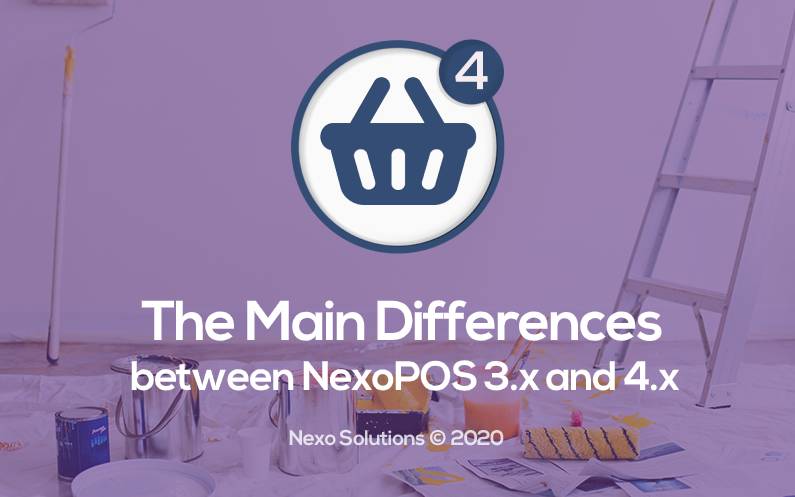 NexoPOS 4.x comes with a new structure. After several months of research, we chose to deploy NexoPOS 4.x on Laravel first. In comparison with the previous tool used on NexoPOS 3.x, Laravel offers way more tools that helps :

NexoPOS 3.x is based on a custom version of CodeIgniter which tries to bring the Hook from WordPress and the routing from Laravel. That mixture of features was the main advantage of NexoPOS 3.x but also the major concern as script integrated (created by third-parties developers) was dropped and no more supported.

The main issue we had with NexoPOS 3.x is the lack of asynchronous operations, which make the application to be very slow because all heavy operations were handled by the same process that executes NexoPOS 3.x. That caused the app to be slow time on time.

During the configuration of the environment for NexoPOS 4.x, you're invited to configure Queues, and that's exactly the place you can define how many PHP processes can handle NexoPOS 4.x background tasks.

Concretely, let's say you want to delete an expense that has been made last week. On NexoPOS 3.x while reading the report, the system will compute every expense made during the time range you've defined. When you consider checking the same report multiple times during a day and about a hundred times a week, that makes a lot for the server.

On NexoPOS 4.x every operation is computed before being stored on the database. This mean, if you delete the expense from the last week, NexoPOS 4.x will run a background task that will compute taxes from that day till the current day, gradually every 5 minutes, this way even if the changes aren't replicated immediately, it's just a matter of minutes before having all the reports consolidated. That the same process that is used for creating recurring expenses.

Because NexoPOS 3.x was running on a quite old framework lacking tools to ensure a better development, we were forced literally after every update to manually test the entire application.

Think about it, we were forced to create products, categories, customers, stores, sales, expenses, etc. That was a very hard task to perform after every single update.

NexoPOS 4.x uses Unit Testing. If that's unfamiliar for you, you should know that it's just a tool to perform tests for us, based on certain conditions and scenarios we wrote. This way, after an update, we just need to run that tests and we'll immediately spot if our change has affected one or more other sections of NexoPOS 4.x.

MarketPlace For Extensions And Apps

The marketplace we've launched is mean to host all extensions and app we'll create and release for NexoPOS 4.x. As we want NexoPOS 4.x to be as extensible as possible, you'll usually find there modules or apps that add/modify specific behaviors or even enrich the experience on NexoPOS 4.x.

This because we don't want to overload the application with all possible implementations. Access to the marketplace is free (you need an account which is also free). Some modules are free and others will require a subscription. We're also sharing modules of NexoPOS 3.x we've created so far and that we've not necessarily published on CodeCanyon. These modules are all free.

We know some users might be a developer and would like to customize NexoPOS 4.x themself. If you're in that case, we should let you know that from the smallest package, you get dedicated support from us even on a customized version of NexoPOS 4.x. I would like to clarify exactly what I mean to avoid any confusion.

The support we'll provide is not customizing NexoPOS 4.x for you which is part of another service we provide. The support therefore includes :

If we have reason to believe the changes you have done has led to an issue, we'll also let you know that.

In order to receive support from our team, you need to subscribe to one of our packages. The support is provided as long as the user is subscribed to one of the mentioned packages.

We Keep The Best Of NexoPOS 3.x

We're bringing back everything you've liked on NexoPOS 3.x to NexoPOS 4.x that includes :

We noted what we've disliked and have improved them, especially :

And the list goes further longer as there are many other features we're about to implement very soon.

One of the biggest mistakes we did with NexoPOS 3.x was the lack of technical documentation for developers. Not everyone was able to extend the system. NexoPOS 4.x comes with a readme folder that explains various internal concepts of the system. We'll also here on our website share tutorials and tips on how to use the internal API.

As NexoPOS 4.x is using Sanctum, It herefore has a Rest API, which can either be used by other web apps and even mobile applications.

As we've mentioned earlier, NexoPOS 4.x compute behind the scenes. That makes that while checking a report, no calculation is made and the report is therefore delivered very quickly.

With the use of Laravel relationships, we've been able to link Order to Order Product to Product to Unit Product to Taxes. That way, we're able to track every entity that is created.

That's definitely not all the difference that exists, but this can at least be considered as the main differences between NexoPOS 3.x and NexoPOS 4.x. So do you think it worth migrating to NexoPOS 4.x?